Munich’s Oktoberfest is the world’s biggest festival; the quint-essential experience where German stereotypes dance to the beat of live bands, and it’s just two and a half hours by train or by car from Stuttgart. 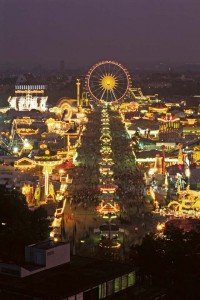 Photo by Thinkstockphotos.com
With multiple huge fest tents and a wide variety of activities, drink and food available, Oktoberfest sprawls throughout downtown Munich and the party goes well into the night. This year, the world’s largest fest is scheduled for Sept. 20 to Oct. 5.

This year marks the 181th Oktoberfest celebration, which runs from Sept. 20 to Oct. 5, and like every year, it is shaping up to be a two-week, non-stop celebration.

The 42-acre Theresienwiese, the location of the famed festival, houses 14 large tents and more than 20 smaller ones. Each beckons visitors inside where rows of revelry park on stadium-sized wooden benches.

In order to get a seat in a tent, buy tickets in advance. Visitors can enter the tents without reservations, but will not be served unless they have a seat. Those who are pushy or patient, or simply arrive early (before 11 a.m. is advised), can usually find one somewhere.

All tents (big and small) are packed to the hilt, so you may find yourself rubbing more than elbows with fellow tourists and locals, but that’s part of the Oktoberfest charm.

Tents can hold hundreds to thousands of festivalgoers, the largest (and oldest) being the 10,000-seat Schottenhamel, known to many as the “party tent.” The Hippodrom tent is a colorful, hip attraction where local celebrities sip on libations, while the Hofbräuhaus tent is as popular as the beer hall of the same name — a favorite among American visitors.

Another crowd pleaser, the Augustiner beer tent, offers a more relaxed atmosphere that is great for families. Not surprisingly each tent keeps tens of thousands of liters of beer at the ready and most (if not all) are cash only.

While the party is self-contained in the tents, outside, visitors can roam fairgrounds for rides, roller coasters and carnival games. Parents with small children can best enjoy these games on Tuesdays, coined “family day,” with special discounts.

The train is probably the most worry-free option for getting to Oktoberfest. Various options are available at www.db.de and most take about two hours and 20 minutes from the Stuttgart main train station. Those who don’t plan on staying overnight should be sure to check ahead of time for the last train running nightly from Munich to Stuttgart, including local connections if needed. For more information on using Germany’s public transit system, see the related article on page 30.

For those who would prefer to drive, Munich offers several park-and-ride options in the surrounding area. Drivers can park just outside the city and commute via U-bahn. Visit www.oktoberfest.de for additional information and a comprehensive list of park-and-ride locations.

Once in town, just follow the massive crowd of people, or look for Oktoberfest signs and you’ll eventually get there. 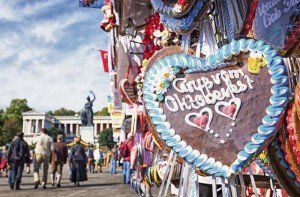 Photo by Thinkstockphotos.com
Booths offering traditional German products like this gingerbread heart which reads “Greetings from Oktoberfest,” are part of the world’s largest festival.

According to the Munich Tourist Office, more than six million people visited the grounds during the 2013 celebration and consumed the same number in liters of beer, in addition to thousands of sausages and pork knuckles, and more pretzels than could be counted.

It takes approximately two months to create the city of Oktoberfest and brings in an estimated $1.2 billion, employing about 12,000 workers.

But Oktoberfest is more than a carousing wassail; it’s a tradition that started on Oct. 12, 1810, with the marriage of Prince Ludwig and Princess Therese von Sachsen-Hildburghausen. All of Bavaria celebrated the nuptials year after year until Oktoberfest became an established event.

Today, the focus is no longer on the royal pair, the hoopla has instead taken the spotlight and a “prost” with a thousand of your new closest friends will surely create a reason to celebrate for years to come.