On Nov. 16 and 17, the U.S. Army Garrison Stuttgart leadership will participate, as for the past five years, as part of the German “National Day of Mourning” wreath laying ceremonies in Stuttgart, Böblingen and Kornwestheim.

In Germany, Volkstrauertag, or National Day of Mourning, is typically held two Sundays before the first day of Advent. The day, also known as Stiller Tag–day of silence–commemorates all those who died in armed conflicts or as the victims of violent persecution worldwide.

In 1919, the Volksbund Deutsche Kriegsgräberfürsorge, or German War Graves Commission, proposed a Volkstrauertag for all German Soldiers who died in World War I. It was first officially observed in 1926. 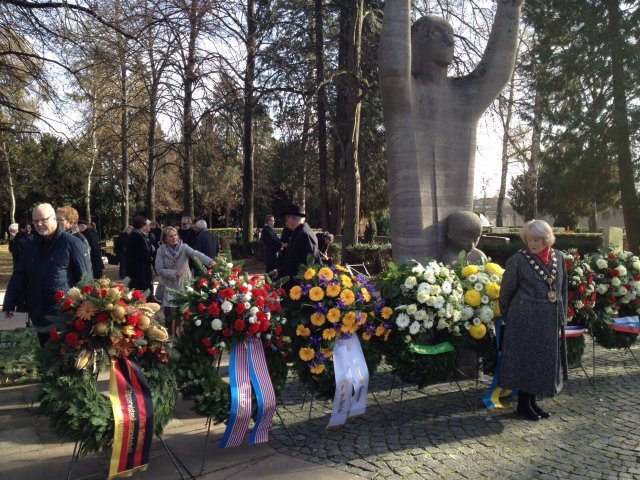 The ceremonies are historically attended by high-ranking host nation officials, including lord mayors of Stuttgart, Kornwestheim, and Böblingen, the president of the District Government Stuttgart, as well as service members of the German Bundeswehr and German partnership cities.

This year, Col. Jason W. Condrey, garrison commander, will be represented in Stuttgart and Böblingen by the Garrison   members of VFW will function as wreath bearers and will play the automated bugle. Members of the JROTC team will carry the wreath at  Böblingen’s ceremony, and the one in Kornwestheim will be represented by Col. (Chaplain) William Lovell with two HHC soldiers.

According to Host Nation Relations’ Advisor Carola Meusel: “The garrison will benefit from attending the event because it signals our commitment to the U.S./German alliance and demonstrates our reverence for the sacrifices of soldiers who fell in all armed conflicts.  It also demonstrates our recognition of official host-nation observances.”

The U.S. Army Garrison Stuttgart Public Affairs Office coordinates the purchase of three wreaths and makes sure they get delivered on site, which is part of their community outreach.