Holidays leading to Christmas in Germany 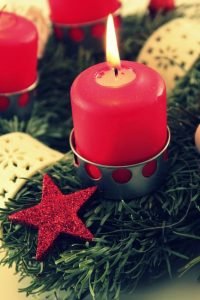 Advent – Counting Down to Christmas

Many families in German-speaking Europe observe Advent, a religious celebration preparing for the arrival of the Christ child on Christmas Day. An Adventskranz, or Advent wreath, with four candles is set up on the first Sunday of Advent (the fourth Sunday before Christmas). Each Sunday leading up to Christmas, the family gathers around the wreath to light the next candle and sing Christmas carols.

The modern candy-filled Adventskalenders, or Advent Calendars, with treats for each of the 24 days leading up to Christmas, are a popular, secular celebration of Advent.

In rural areas of southern Germany and Austria, Kloepfelnaechte, or “Knocking Nights,” are still observed on one of the last three Thursdays before Christmas. Groups of friends go from house to house within their village, knocking on doors and picking up little presents from the inhabitants. Other groups bang on doors, singing seasonal songs and reach in to the house to collect a reward, similar to the American tradition of rewarding Christmas carolers with cookies.

The Feast of St. Thomas is celebrated on December 21st, which is also the shortest day and longest night of the year. In times past, it was called “Durchspinn-Nacht,” or “Spinning Night.” On this night, some women sat at the spinning wheel literally all night long, working to earn money for Christmas. The more frivolous women would eat, drink and dance through the night to make the darkness shorter. For this feast, a cake filled with dried fruits, such as pears, plums, raisins, figs and nuts, is baked as a reminder of the apples and nuts St. Thomas brought to children.

It was not until the late 19th century that the tree became one of the major symbols of Christmas, as celebrated in the song “O Tannenbaum.” Many other Christmas songs commemorate the season, the event of the Savior’s birth, and reflect the feelings of celebration and joy, helping to add to the festive atmosphere. Incidentally, the words to “Oh, Christmas Tree,” are set to the tune of an old German student song and became one of the most popular of all Christmas carols. Those of you from Maryland and Georgia know that both states use the same melody for their state anthems.

All of these events lead up to Weihnachten, which means “Sacred Night.” This is also Christmas Day. Christmas Day has been celebrated on December 25th since the fourth century. You may not have known that the giving of Christmas presents on Christmas Day started more recently, during the Reformation. In the 16th century, Martin Luther introduced Christkindl, an angel-like Christ child, who sent a bag of gifts called a “Christbuerde” to every German child. A proper Christmas gift bag contained five items: a toy, something to eat, a coin, something to wear, and a school or pencil box (a scholastica). Everyone’s presents were put on a table, called a Gabentisch, and the family gathered round it for the giving, or Bescherung.

Germans, like Americans, enjoy having the family together for Christmas. A survey some years ago showed that about 75% of Germans make every effort to spend Christmas at home, singing carols and exchanging gifts.

It is important to remember the reasons for the celebration as you create your own wonderful memories of the traditional holidays celebrated in Germany.

2016-11-23
Previous Post: USO’s ‘Thanks for Thanksgiving’ gives to 200 service members
Next Post: Patch Kindergartners deliver thanks to Military Police