Chocolate is not going to help you with your New Year’s resolutions.

But, if you’re looking to indulge, just take a short drive south of Panzer Kaserne to idyllic Waldenbuch. When the wind is right, you can smell Ritter Sport chocolate being made.

Whether new to U.S. Army Garrison Stuttgart or you’ve been a while, a trip to the factory – with its shop, exhibits, museum and café – will make a nice afternoon trip. It’s a great place to visit with family and friends.

Staff of the Stuttgart Citizen recently went down to Ritter Sport to learn more. Bianca Kulik, a Ritter Sport company spokesperson, and her colleague Jessi Uetz showed us around and told us about the place. Here’s some of what we learned.

The company
Chocolate first arrived in Germany in the 17th century and was sold as something healthy – a medicine and luxury item for nobility. In the 1800’s, now-famous brands like Nestle, Callier, Cadbury and Hershey – just to name a few, began making chocolate for the masses.

In 1912, Alfred and Clara Ritter began making chocolate in Bad Canstatt. By 1930, they moved the factory to Waldenbuch. Back then, soccer fans wearing sports jackets – as was the fashion in those says – would stop by the Ritter shop for chocolate. Clara Ritter latched on to the idea.

Ritter would create a square bar to into a sports jacket pocket — giving the brand a new name, Ritter Sport. Ritter, which means “knight” in German, is still family-run operation. Ritter Sport is now exported to 100 countries.

“It’s made here and only here,” Kulik said. “Wherever you go, it’s made here in Waldenbuch, with the same ingredients, same recipe and the same quality.”

The exhibits
Visit Ritter Sport’s exhibits on cocoa and chocolate production. Open since 2005, the displays are written in both English and German. Large groups can request a guided tour offered in English. There is a 15-minute film, in German, on the history of the company. If you ask at the desk nearby, they can play an English version. 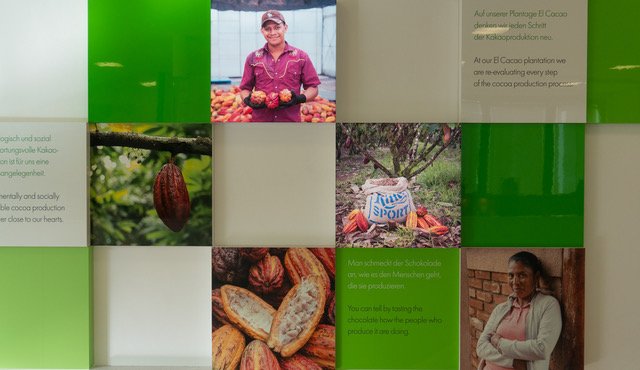 Learn about Ritter’s cocoa plantation in Nicaragua and how the company has worked for 30 years with small farm cooperatives there, to include workshops on harvesting and offering a chance to taste the chocolate their plants help make.

“We help them and pay them better prices. Then they can plan and are sure we are going to buy their cocoa,” Kulik said. “In turn, we get better quality. It’s a plus for both sides.”

A model-sized Ritter factory, made by a recent intern, has a little truck that delivers patrons a small chocolate bar. Kids can play a quiz, searching for answers in the exhibits, and earn a bag of chocolate.

They also host children’s birthday parties Children choose the chocolate and the ingredients, then mix it together. While the chocolate solidifies, they paint the packaging. Each child gets two of their very own bars.

The shop
What’s good to get? Each variety has its own color. The light blue-packaged Alpenmilch is the most popular, followed closely by the butter cookie-layer Knusperkeks in a brown wrapper, Uetz said.

Each square bar is 100 grams, about 3.5 ounces, with 16 squares in a four by four grid. Only Jamaica Rum, a popular variety, is kept in its original small rectangular shape, Uetz said.

Some items are shop exclusives – like the “mini meter,” a three-foot sleeve of miniature bars. Uetz explained that Schwabians like a bargain. In the back of the shop, they swarm around shelves of two-kilogram mixed bags sold at a discount.

In the very back – you find the experimental varieties like dark chocolate with cranberries and nuts, or rum raisin. Those bars sell cheaper than the others. Developed by the innovation and research team, they are experiments that undergo testing before heading to the market.

The museum
The museum is home to Marli Hoppe-Ritter’s art collection. Like the chocolate, the contemporary art has a lot of squares, and other geometric shapes. The museum is open from Tuesday to Sunday, from 11 a.m. to 6 p.m., and costs six Euros. Children, up to age 18, are free.

The café
Hoping for a quick hot chocolate to go? That’s not how the café works. Plan on sitting, relaxing and savoring your drink. There are at least six variets of hot chocolate to try. Also on the menu are plenty of breakfast items, grilled sandwiches, salads and Schwabian favorites, like Maultaschen.

From the café, you look out over the forested Aichtal valley. The café is open daily from 9 a.m. to 6 p.m. in winter months, and from 9 a.m. to 7 p.m. from March to September.

Need to walk off some of that chocolate? Stroll along a nearby footpath that leads you directly into the adjoining Schönbuch nature park and nearby Lake Fäulbach. It starts by a cubic sculpture next to the parking lot.  The area also has many cycling paths nearby.

Finish the day trip by heading into Waldenbuch’s medieval-looking old town, with its half-timbered buildings, where the Museum der Alltagskultur (every day culture) is in the old castle.