By Hannah Rhoden & Alisha Pabon
Special to The Stuttgart Citizen

Praha (Prague) has a rich history and is a short six-hour drive from Stuttgart.

The city is bursting with classical architecture, bridges and ancient clocks, and most attractions are free of charge. 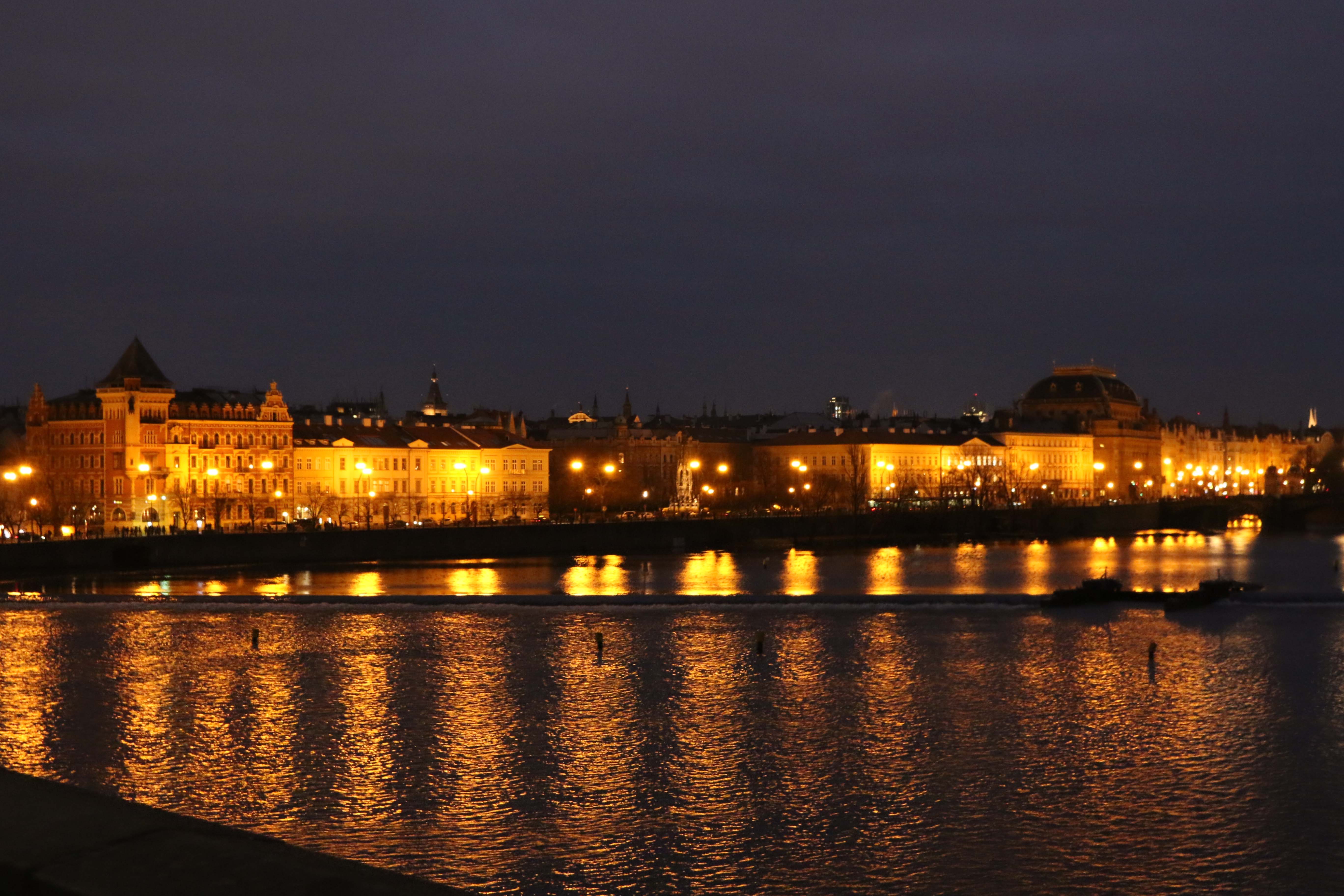 A view of the city of Prague from the Charles Bridge at night. Photo by Hannah Rhoden

Enter the city via the Charles Bridge, the oldest bridge in Prague dating back to 1357. Named after its creator, King Charles I, the bridge is adorned with statues of saints and offers a view of the city on both sides. To view the statues best, walk slowly over the bridge. At first glance, the statues seem dirty and lackluster in detail. However, a closer look reveals their vulnerable, complex details; some statues promise good luck by touching them.

The Astronomical Clock, more than 600-years old, counts time at the heart of Prague’s Old Town Square, mounted on the Old Town Hall. Its astronomical dial is operated by the zodiacal ring, an outer rotating ring with icons of the sun and moon. Next to the clock, are meticulously detailed figures representing vanity, greed, death and lust. The details on the clock seem never-ending. 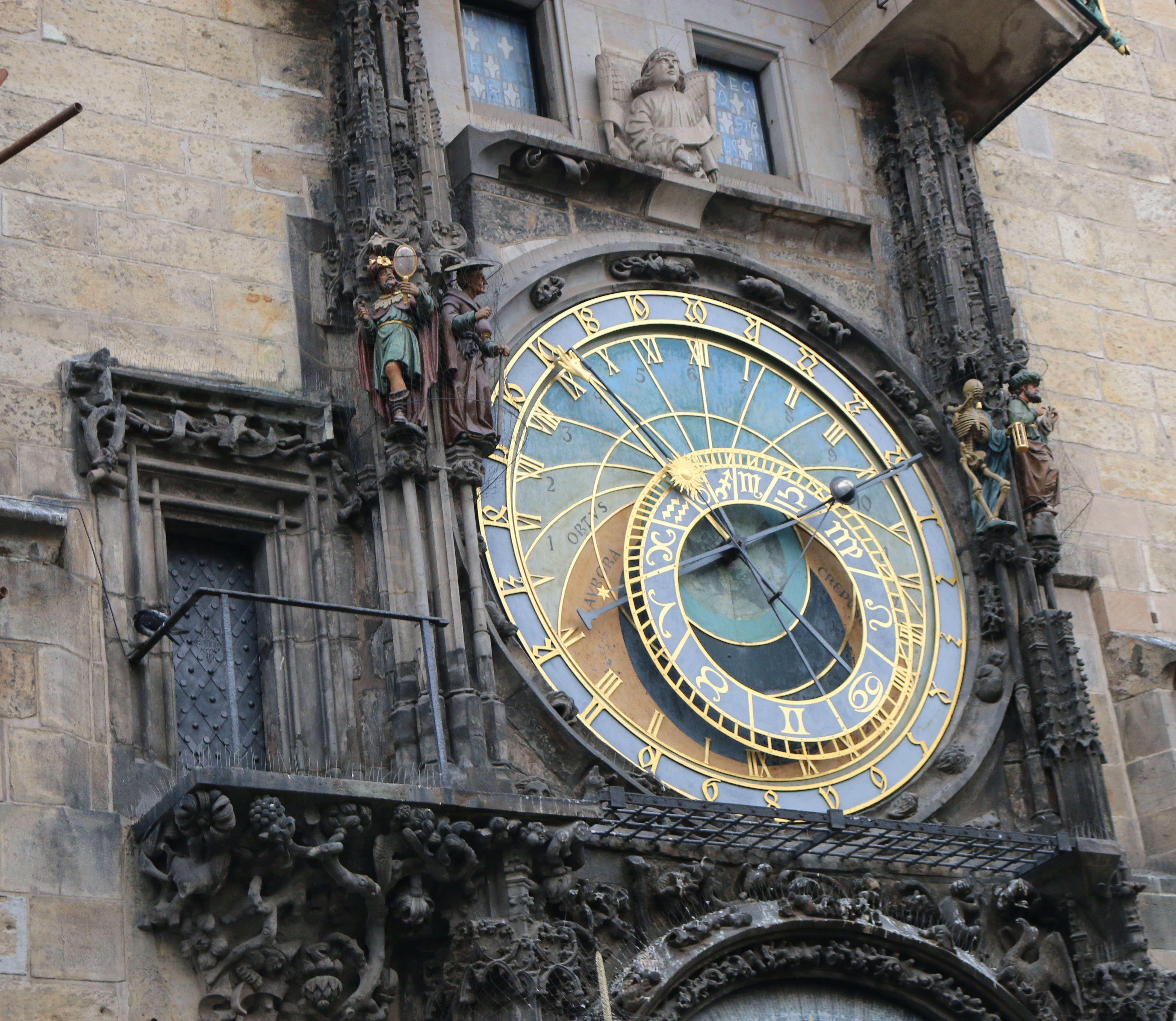 Near the end of World War II, the clock was seriously damaged in a battle and repairs then were made with modern technology; the modified electric drive is being removed and replaced with a system of stone weights and oak barrels like it had in 1860. Repairs are expected to be done this summer.

The Old Town Square, the most significant square in Prague, was founded in the 12th century. In addition to the Old Town Hall, and the Church of Our Lady before Týn, the square is dominated by the Baroque church of St. Nicholas, the Rococo Kinský Palace, the Gothic House at the Stone Bell, and the monument to Jan Hus depicting a victorious battle during the protestant reformation. In the pavement of the square are memorial stones marking the execution of 27 Czech lords in 1621 during the Protestant rebellion.

There is also a meridian which was used to tell time via the sun.The National Memorial to the Heroes of the Heydrich Terror, located beneath the Baroque Church of St. Cyril and Methodius in an underground crypt. It was a secret World War II hideout for seven Czechoslovakian soldiers after they parachuted in and assassinated Nazi Deputy Reich Protector Reinhard Heydrich, May 27, 1942. 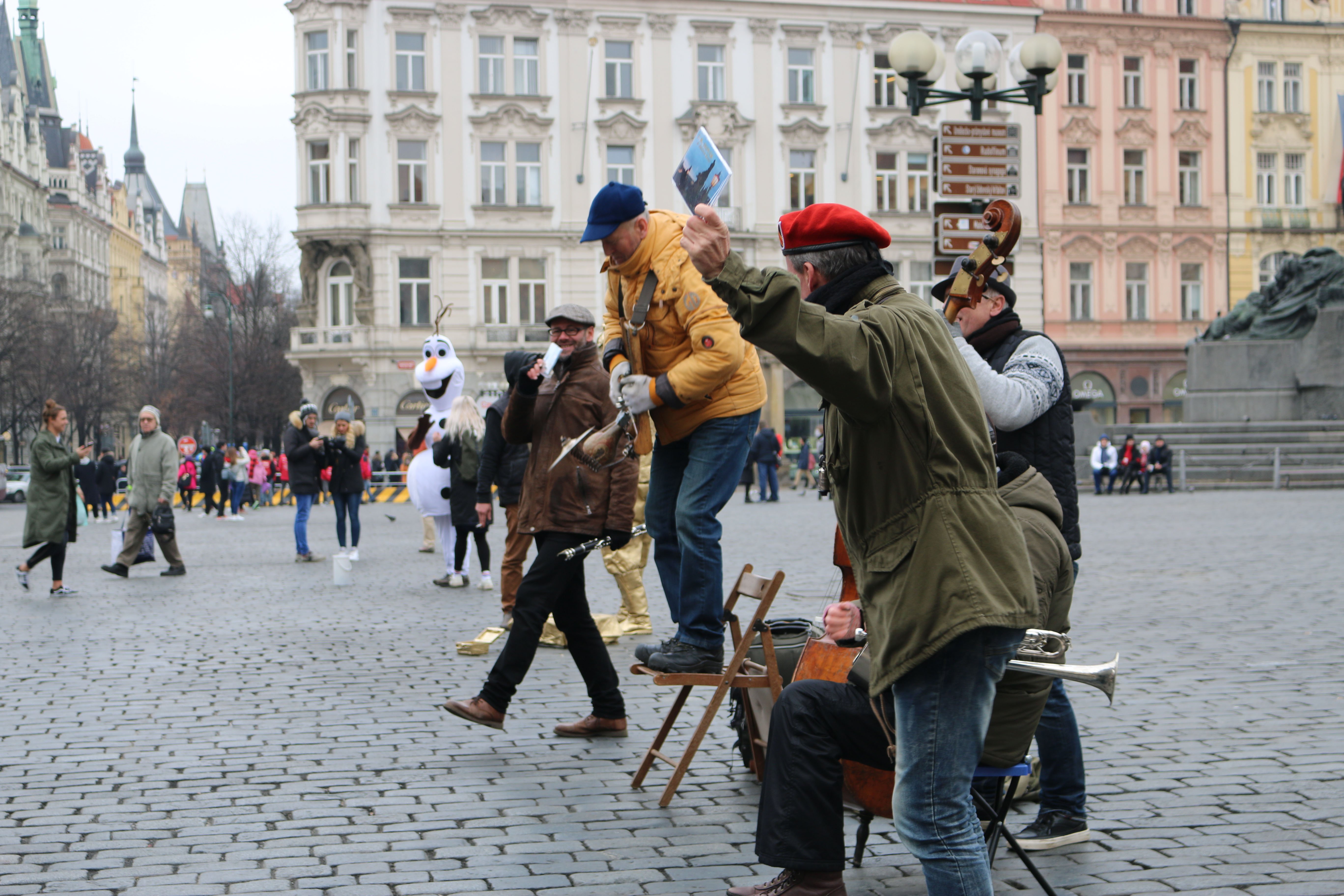 Perched at the top of a hill overlooking the city and worth the trek is Hradcany Castle, also known as Prague Castle. It houses the office of the president of the Czech Republic, and according to “The Guinness Book of World Records,” it’s said to be the biggest castle in the world at about 1,870 feet in length and an average of about 430 feet wide.

The St. Vitus Cathedral on a bright morning in Prague. Photo by Hannah Rhoden.

Its history stretches back to the 9th century. The square before the castle is just as intricate as the castle itself.

Nearby is St. Vitus Cathedral, a prominent example of the Gothic architecture of Prague. Built over a span of 600 years,the church is a center for religious and cultural life. Once inside, the stained glass windows are not to be missed as the light floods in. The ceilings are high and the corridor long. Much of the art and stained glass windows were created by prominent Czech artists, adding an extra sense of authenticity.

Art Nouveau, Monks and a Beatle

The Strahov Monastery, founded in 1143 after the pilgrimage to the Holy Land in 1138, offers visitors an opportunity to enjoy the views and stroll around. The 800-year old library is located in the theological and philosophical halls. Despite the ransacking by invading armies, it still holds 16,000 books and a noteworthy brewery. 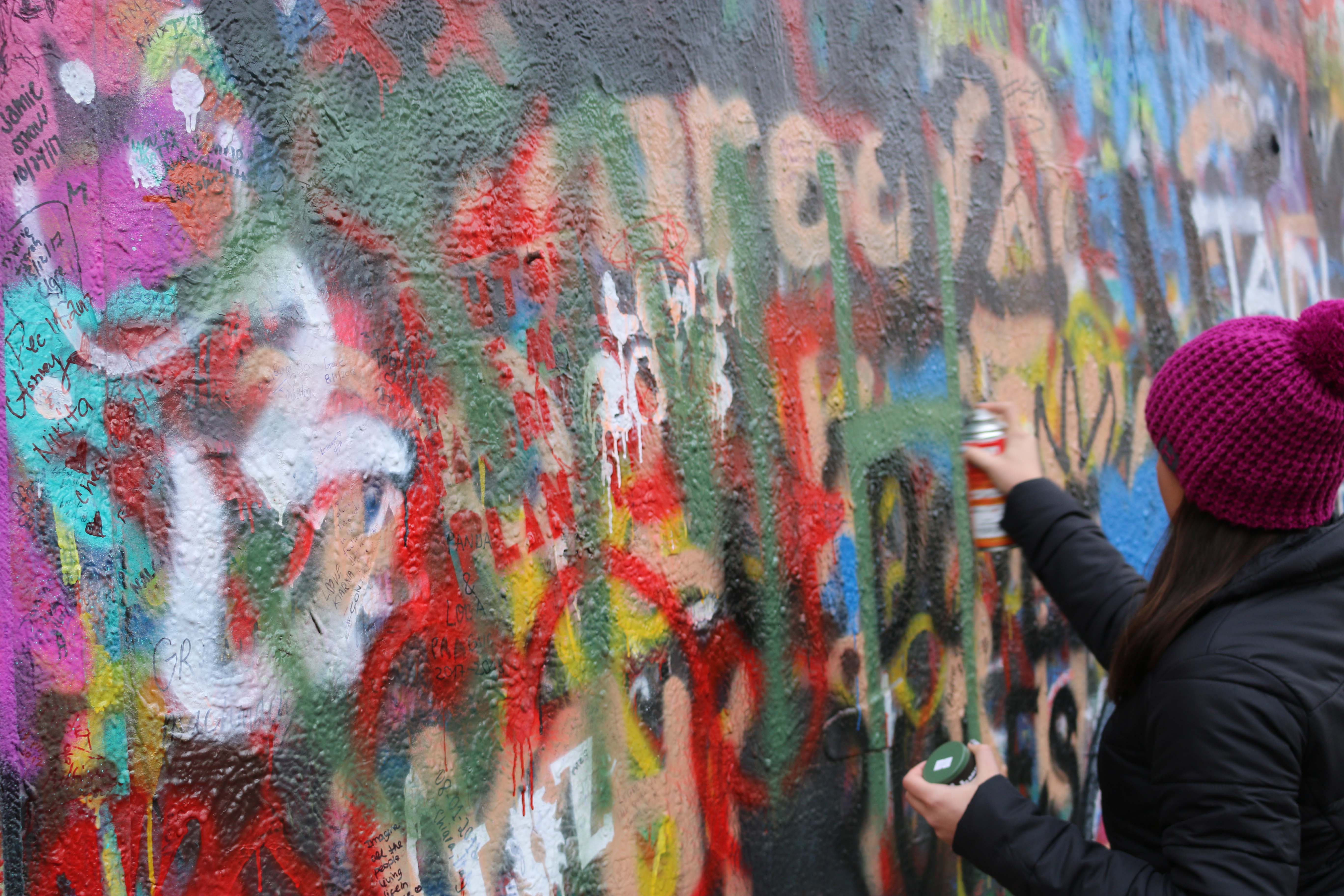 Maddie Haggard marks the John Lennon wall in Prague with her initials. Photo by Hannah Rhoden

The John Lennon Wall got its name shortly after the former Beatle’s death. The wall had been a target for graffiti by rebellious Czech citizens to express themselves. Although Lennon never visited Prague, he was an inspiration to its people.After his death, an unnamed artist painted the eyes of the singer on the wall; today, anyone can paint on the wall to express themselves.