HomeFeaturesSuicide prevention starts with you: Learn to identify and act on warning signs

Suicide prevention starts with you: Learn to identify and act on warning signs

Your boss gives you a poor performance review. Your girlfriend says, “That’s it. I’m gone.” You’re afraid your pay won’t stretch to cover both your rent and your credit card bill. We have all experienced blows to our self-esteem, problems at work, losses of people important to us and anxiety about how to pay our bills. So if these things are happening to a friend, you can understand how they are feeling. But how do we recognize when that friend is considering suicide?

Here are some scenarios that illustrate warning signs and some stressors that might put someone at risk for suicide:

Mike was always punctual, safe and careful. These days he is often late to work and has been missing meetings. He’s also driving his motorcycle irresponsibly as if it was a game, cutting in and out of traffic. He had set his sights on Ranger school but recently learned he was not accepted. Major changes in behavior and reckless behavior may signal that a person is contemplating suicide.

Jane usually has a glass of wine with dinner. Now she is putting away a pint of bourbon every night. It’s solitary drinking; she is not hanging out with friends like she used to. Her mother died a couple of months ago, so maybe it is related to that. Withdrawal from friends may be a sign of suicidal ideation, and self-medication with alcohol or drugs increases the risk of negative moods and impulsive behavior.

Recently, every conversation with George ends up with a story of some death he has heard about. He even tried to give his guitar to Graham. That seems weird: he used to talk about how proud he was to have such a beautiful instrument. His wife has been threatening divorce this last year. Brooding on death may indicate suicidal thoughts and giving away treasured possessions suggests the threat of suicide is imminent. 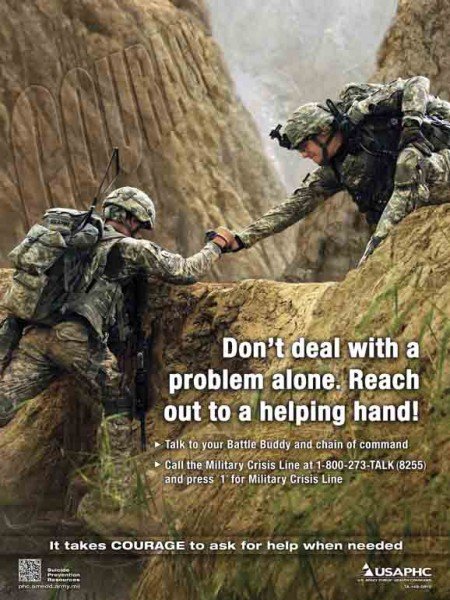 Warning Signs of Suicide
• Changes in behavior
• Increases in drug or alcohol use
• More frequent talk about death
• Mood swings
• Reckless behavior or risky activities
• Anxiety or agitation
• Giving away possessions
• Withdrawal from friends
• Rage, desire for revenge
• Hopelessness
• Feeling trapped
•No reason for living, no sense of purpose

Suicidal intent or behavior often occurs following a number of stressful events and circumstances. There is no magic solution or special indicator to determine when someone is suicidal. However, learning to identify and act on warning signs can be the first line of defense for a battle buddy who may be in need of extra support during a difficult time. Although Army leadership continues to implement programs and strategies to address this issue, the pulse of the force remains at the grass roots level. Suicide prevention starts with you and your attention to the Soldiers you know best. You may not know why someone is having problems, but you are close enough to Ask, Care, and Escort if necessary.