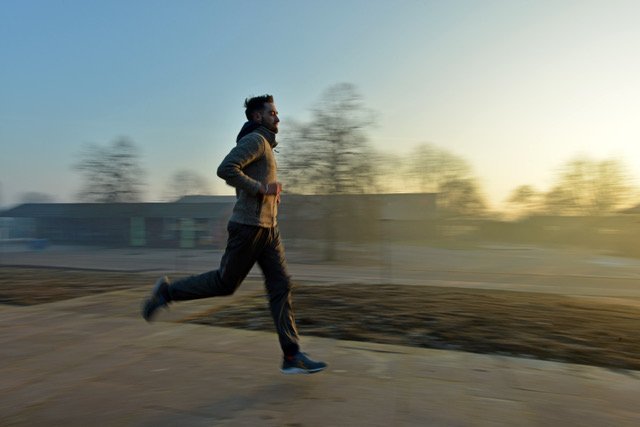 A Missouri-native, Johnson, 25, is attempting run 16,300 miles, ocean to ocean across four of six runnable continents. For the record, he must constantly run eastward. Paths westward don’t count. He began last May, averages about 30 miles per day, and hopes to be done by November.

His goal is to complete the run in 600 days, 21 days less than the record. His cause is to bring attention to suicide, among those who serve in uniform.

“You have to do an extraordinary thing, to move the world a little bit. I had to go out and do something crazy, something most people would think is impossible,” Johnson said. “That’s why I decided to strap the shoes up and do 16,000 miles and dedicate the whole thing to this epidemic.”

Johnson understands the problem, having faced it himself.

In 2017, Johnson completed three years in the military, where he served as a Navy plane captain aboard three aircraft carriers, on deployments to the Pacific and South America. Within six months, missed the camaraderie and began having troubles.

“After seven days of a very intense struggle, doctors were able to rehabilitate me,” Johnson said, retelling what one doctor told him. “Your mind may have given up, but clearly your body hasn’t. Don’t waste it.” 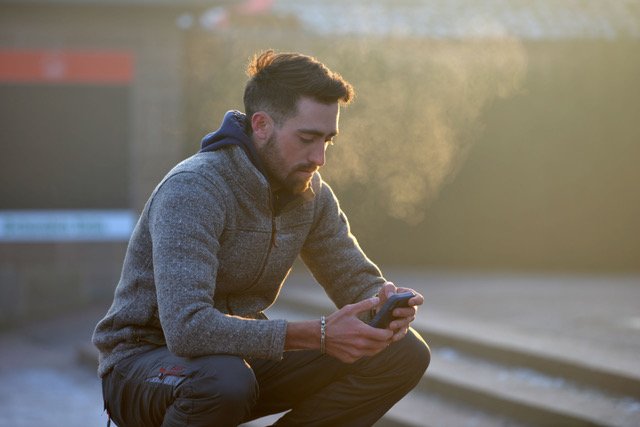 Keeping the world informed of his progress, Johnson checks social media while catching a breath.

Johnson wanted to use his body to help others, he said.  He heard of an Irishman who completed a world run, but learned that no American had. He decided to try and become the first. A Navy mentor encouraged Johnson him. (Details of his run through South American are on StuttgartCitizen.com)

Arriving in Lisbon Nov. 1, Johnson ran through Portugal to Madrid, Spain. Crossing the Pyrenees in France, a well-wisher bought him a birthday meal at Gordon Ramsey’s restaurant in Bordeaux – far better than the tuna and potatoes he eats while on the run.

From Paris, he ran to Brussels – chatting with military police at a small post there before heading to U.S. Army Garrison Rheinland Pfalz and Ramstein Air Base. At Christmas, Johnson took his first rest in nearly two months, staying with a military family near Kaiserslautern.

His 107-mile run from Ramstein to Stuttgart took three days. His GPS maps routed him down wet horse trails.

“I was covered in mud and it was raining,” Johns on said. “But it wasn’t too bad.”

“Ramstein and Stuttgart are the first military communities who have opened up, in the whole entire journey so far,” Johnson said. “It’s something that has really meant a lot to me.”

On Dec. 29, USAG Stuttgart community members ran with Johnson through downtown Stuttgart. The next day, they joined him for supper at a local brewery. He tried Maultaschen – a Schwabian meat-filled pasta – and some local beer. After his world run, Johnson wants to open a café, featuring authentic food and drinks from around the planet, in hopes to educate Americans about world cultures.

He’s looking forward to seeing Prague and Krakow, before heading to Istanbul. Afterward, he will fly to Australia and New Zealand to continue his run.

On Dec. 31, dozens of people listened to Johnson tell his story at Panzer Kaserne during a meet-and-greet session hosted by the USO and the Veterans of Foreign Wars.

“The VFW is very concerned about the epidemic of veterans’ suicides,” said Joe Holder, VFW department of Europe commander. “Dustin is shedding light on this. It’s about awareness and making sure everyone knows … one person can make a difference.”

Col. Jason Condrey, commander of U.S. Army Garrison Stuttgart and Command Sgt. Maj. Toese Tia, attended. How Johnson overcame adversity in his life and on his run, stuck with Condrey, he said.

“He has found something that was obviously absent before. That drives him,” Condrey said. “It’s impressive.”

At the USO, people peppered Johnson with questions. Does he listens to music? He doesn’t. He explained how music is outside motivation that can lead to excuses.

“I don’t believe in the word motivation,” Johnson said. “I believe in the word accountability. If you build your mind to be strong enough to be able to conquer whatever it is – without music – then you’ll never have that excuse and you can always hold yourself accountable.”

What’s thinking about while running? His answer, everything and nothing. For five days, he pondered an ancient coin found earlier in a flea market. Random thoughts arise, often something historical, he said.

Johnson shared challenges he faced in South America – everything from overly curious police to large snakes. In Chile, he was hit by a truck. It crushed his pushcart, bruised half his body and put him in the hospital for seven days. He crossed the Andes at nearly 20,000 feet. Water froze. His phone and GPS froze. His toenails turned black and fell off.

In Argentina’s rain forest, three jaguars attacked his campsite at night. He escaped unscathed, but they tore up his tent and gear.

Eating mostly tuna and potatoes, he lost about 35 pounds. He’s gone through five pair of shoes. After running 1200 miles, one pair were so worn, he was nearly barefoot. In South America, where smaller shoe sizes are more common, Johnson only found a pair two sizes too small. So, he cut holes for his toes and ran another 700 miles.

Yet, atop one mountain, Johnson said he found peace.

On New Year’s Day, Condrey was among the Stuttgart community members who saw Johnson off from Killesberg Park. The scale and the enormity of Johnson’s undertaking is for a good cause, Condrey said.

“He’s doing this to give some visibility to an issue that everybody in the military – and across society – needs to find a way to deal with and be comfortable talking to people about.”

Laura Benton, the spouse of a locally-stationed Marine, was also at Killesberg. When she heard about Johnson raising awareness to suicide, it hit home. The biological father of her daughter, Jazlyn Aronhalt, died from suicide. They both volunteered to help Johnson on his way. 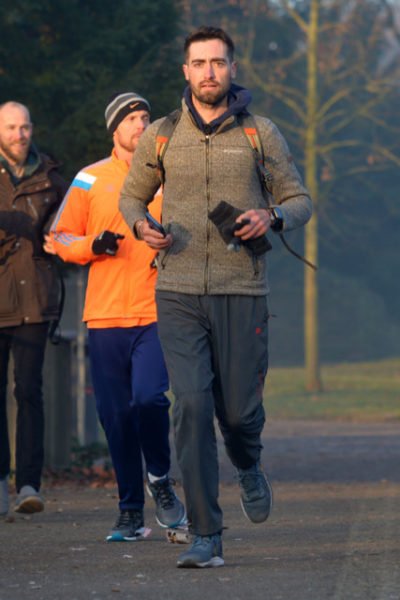 Johnson is joined by local runners as he passes through the Stuttgart military community.

“It’s on a personal level for me,” Benton said. “I just like to help people. It’s in my nature.”

While in Stuttgart, Johnson stayed with Christy Price and her husband Jim, a retired Soldier serving now as an Army civilian. They’ve known people who committed suicide, a daughter’s classmate and the son of an Army friend, Christy Price said.

“Everybody in some small way has been touched by suicide,” she said. “Dustin’s goal, what he wants to achieve, is important. I don’t think he realizes how special he is – a vital piece to the puzzle.”

On Jan. 1, Johnson left Stuttgart on a 420-mile nonstop run to Berlin – a world record attempt. Garrison community members saw him off from Killesberg Park and assisted him along the way.

Johnson ran 19 hours straight, more than 84 miles, when an accident occurred forcing him to stop. He was looking to break the 1986 world record for the furthest distance traveled on foot continuously without sleep – no sleep or stopping except to change should and use the toilet, for two minutes every four hours. That record was 418.3 miles, done in six days, 10 hours. Johnson’s plan was to run to Berlin’s Brandenburg Gate, a route that took him toward USAG Bavaria.

During a break, an oncoming car swerved near him. He jumped out of the way, landing on icy grass. He slid into a ditch, hitting concrete about 10-feet below.

“I landed really hard on my right foot at a weird angle and hurt my ankle,” Johnson told Facebook followers.

Laura Benton and her daughter Jazlyn Aronholt, two Stuttgart community members from were assisting Johnson along the run. In pain, with a swollen ankle, Johnson limped onward for another two hours. With a heavy heart, he decided to stop.

“With the 6,000 miles in 190 days, my body has been put through more than I ever imagined and this just added to that,” Johnson wrote online. “So, for my health it was the best things I could do.”

Johnson is resting at the home of a childhood friend, Ashley Everett, an Army spouse at USAG Bavaria. He’s assessing how bad the ankle injury is, and if it will affect his attempt to complete the world run. 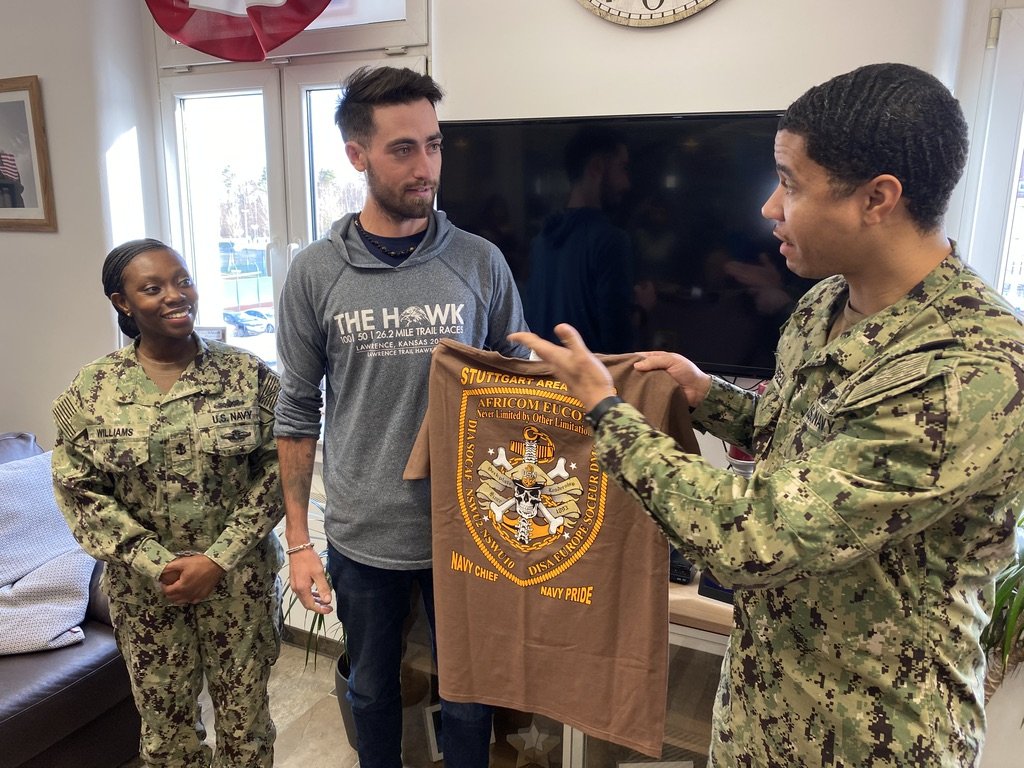 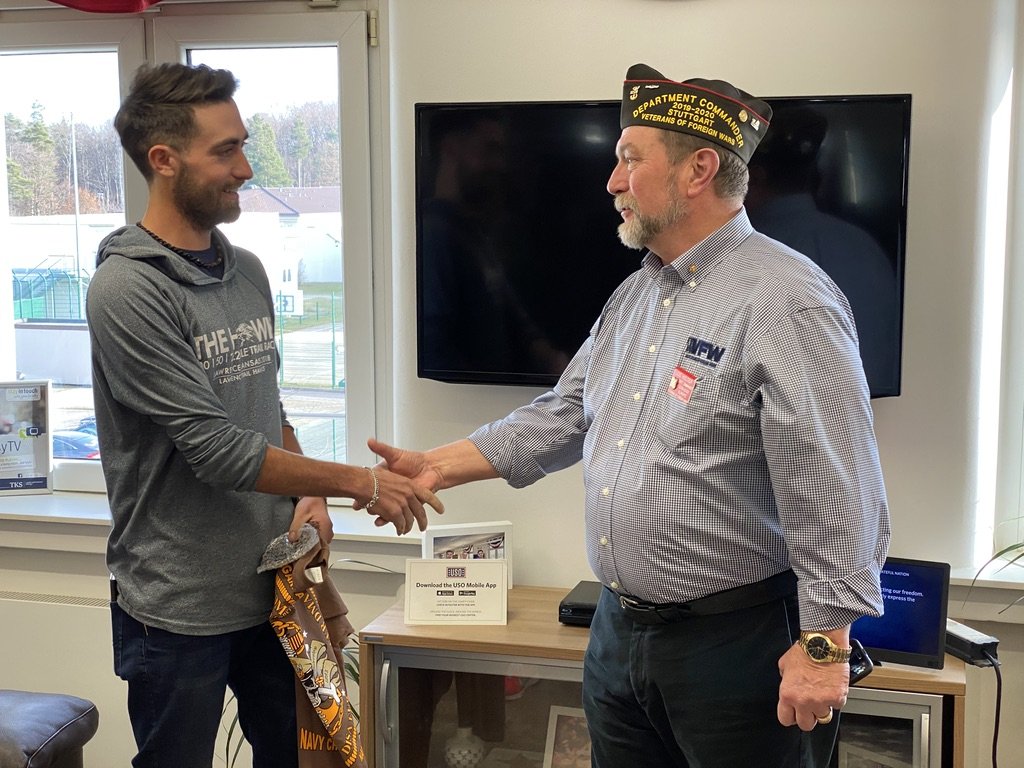 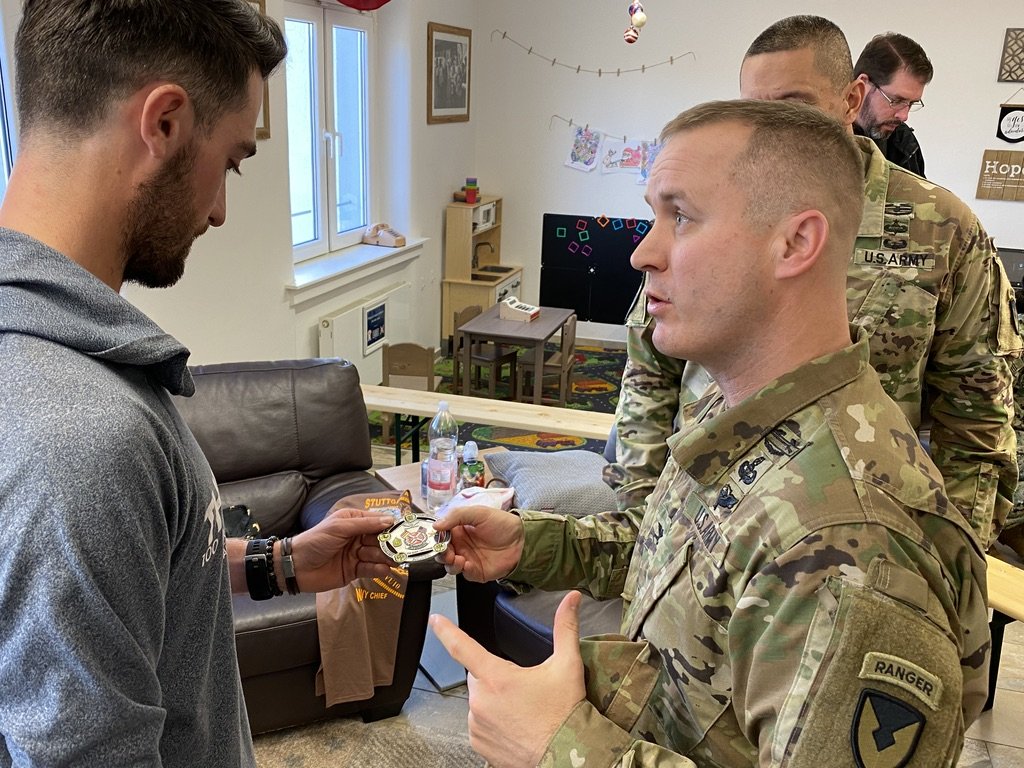 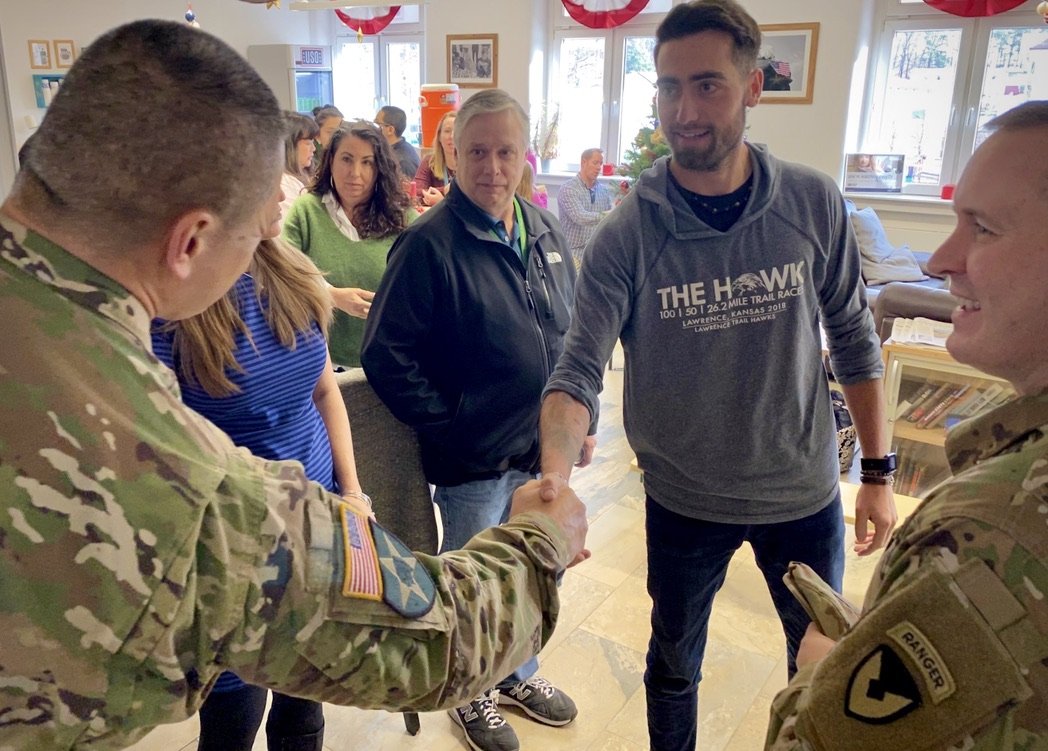 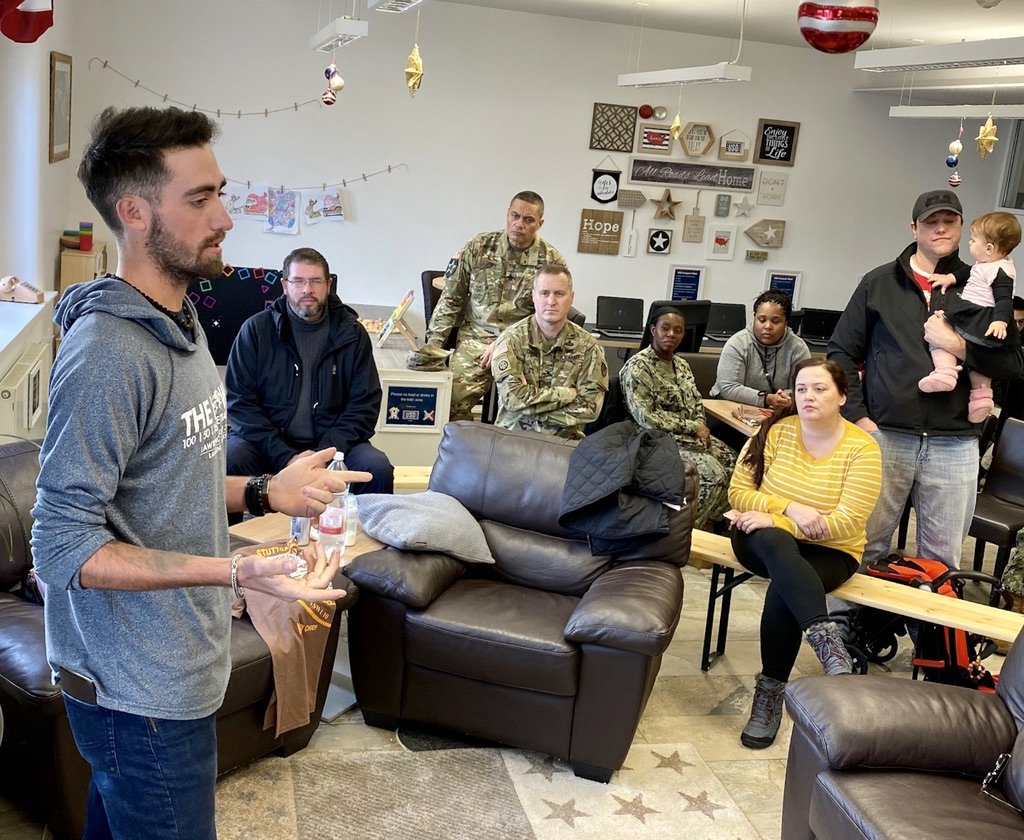 UPDATE, Jan. 8: Due to the ongoing brush fires in the Australian outback, Johnson had to modify his plans and will fly to California instead of Australia upon completion of his European run.