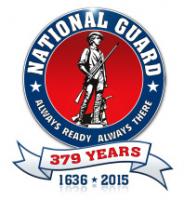 On that day in 1636, the first militia regiments in North America were organized in Massachusetts. Based upon an order of the Massachusetts Bay Colony’s General Court, the colony’s militia was organized into three permanent regiments
to better defend the colony. Today, the descendants of these first regiments – the 181st Infantry, the 182nd Infantry, the 101st Field Artillery, and the 101st Engineer Battalion of the Massachusetts
Army National Guard – share the distinction of being the oldest units in the U.S. military.

The National Guard is the oldest military force in the Department of Defense, and is uniquely characterized by the dual state-federal organization that divided the militia power and its importance in the U.S. Constitution.

Throughout history, the Guard has been a trusted, reliable force that is “Always Ready, Always There.” Most days, Guard service members are working civilians in the community who could be the mechanic fixing car brakes or a tax accountant. Quite often, the experiences and knowledge gained as civilians in the community are skills Guard members take back to duty stations all over the world.

Guard service members are dispersed across 3,000 communities nationwide. They typically act as the first military responders to domestic emergencies. When Americans need their military, most often they reach out to the National Guard.

The National Guard in its federal role has contributed to every conflict since our nation’s birth in support of worldwide combat, humanitarian, and security cooperation operations.

Nearly half of Guard members today are combat veterans. Some are veterans two, three, four times over. During the past 14 years of conflict, hundreds of National Guard members paid the ultimate sacrifice for our nation.

While much has changed since the beginnings during the 17th Century, in the face of today’s national security and fiscal challenges, the National Guard remains a proven and trusted force that is accessible, adaptable, and affordable.