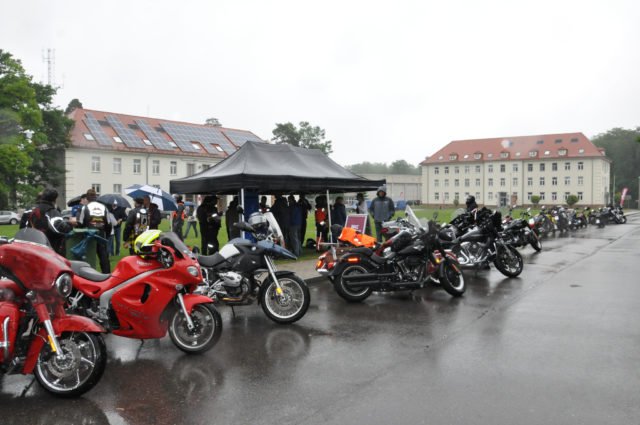 Riders huddle under a canopy and umbrellas to avoid the rain during the morning check-in, May 20. Photo by Bardia Khajenoori, USAG Stuttgart Public Affairs

You can tell the hardcore motorcycle enthusiasts from the fair-weather riders when the heavens open up with cold rain and the roads become slippery. An intrepid band of 41 out of a hundred bikers registered for the “Good Ride Salutes USAG Stuttgart” motorcycle poker run defied the elements for a successful, safe, Sunday putt of about 100 miles, May 20.

“The day saw some great synergy,” said Martha Povich, event manager, USAG Stuttgart Family & Morale, Welfare and Recreation. “ May is Motorcycle Safety Month, and our garrison Safety Office and our Motorcycle Safety Foundation rider-coaches led with safety briefings for riders before the five-stop poker run throughout the Black Forest.”

Sunday dawned soggy with riders (some with passengers) wearing appropriate weather-resistant riding gear. They signed in or registered to make the run, bolstered by coffee and breakfast items provided by FMWR.

A spirited blessing of the bikes preceded the run, offered by Ch. (Lt. Col.) Derrick Riggs, deputy command chaplain, U.S. European Command. Riggs’ said he’d prayed for a break in the weather just as the rain abated over Panzer Kaserne. After that, the thunder came not from the sky, but from the 41 bikes of assorted makes and models as they revved up to start. A handful of cameras, one team filming from the back of a truck ahead of the column of bikes as it exited Panzer’s back gate, documented the event for their respective media outlets.

The ride was led by former professional freestyle motocross competitor Carey Hart, creator of the Good Ride Rally and supporter of a charitable foundation that supports veterans and their families, especially those from suffering mental and physical disabilities.

“I personally don’t have a lot of experience with the military, but my wife’s family is all military. My father-in-law was in Vietnam, his wife was in Vietnam, and my brother-in-law is Air Force at the Pentagon right now, and he’s getting deployed in a couple of weeks,” Hart said. “For me, personally, I go to a lot of motorcycle rallies. We started (Good Ride) because we wanted to do our part.”

As soon as they were a few miles away from post, intermittent showers of varying intensities continued most of the route. At each stop, riders could warm up and enjoy a complimentary hot beverage and snack as they drew their cards, all vying for the best poker hand at the end.

The first stop was at the world famous chocolate factory in historic Waldenbuch, followed by stops at a bakery or restaurant open on a day that was both Sunday and German holiday. The winding route through scenic, small towns was perfect for motorcyclists despite the dodgy weather.

Riders catch a cup of coffee and a break from the rain at the second stop, May 20. Photo by John Reese, USAG Stuttgart Public Affairs

By the time the riders pulled back into the kaserne and poured the water out of their boots, the sun was shining and the party was in full swing.

“It was really amazing to see all the folks and departments, as well as the German Polizei, work together to make this happen,” said Mary “Tweedy” Knef, manager, FMWR Commercial Sponsorship and Advertising. “FMWR and the entire garrison team came together to bring a really cool event to the community.”

Burgers and brats flew off the grill, complete with sides and non-alcoholic drinks,  as “The American Hitmen,” a truly rockin’ band composed of Iraq combat veteran Marines, entertained with classic rock and original tunes. And the Hitmen weren’t the only Marines in support of the rally.

“In the afternoon we got help setting up and taking down for the barbecue from a brilliant Marine Forces-Europe team of volunteers,” Povich said.

The weather continued to improve as Good Ride participants stop for the final card of their poker hands, May 20. Photo by John Reese, USAG Stuttgart Public Affairs

The winners of the poker run were announced and the band finished up the day with a rock ‘n roll playing of the National Anthem reminiscent of Jimmi Hendricks’ rendition.

A future motorcyclist and his family admire a bike while the rally fest is in full swing. The day ended warm and partly cloudy. Photo by Bardia Khajenoori, USAG Stuttgart Public Affairs

Click for a photo album of the ride and BBQ