May is National Military Appreciation Month 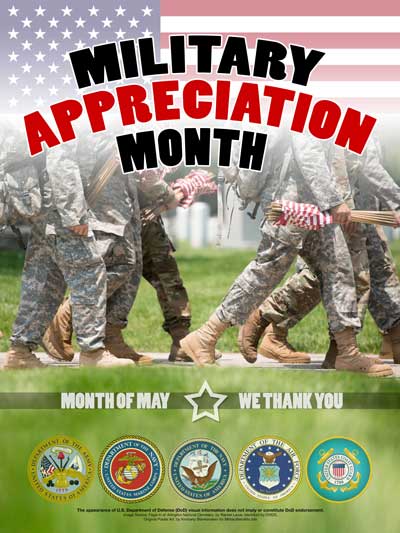 May is National Military Appreciation Month, a time to recognize and celebrate the contributions of the courageous men and women who have served or are currently serving in the U.S. armed forces.

Legislation introduced in 1999 by Sen. John McCain designated May the month for Americans to recognize the sacrifices and accomplishments of service members.

Loyalty Day, May 1:  A day set aside for the reaffirmation of loyalty to the United States and to reflect on the proud heritage of our American freedom.

Public Service Recognition Week, May 5–11: A time set aside to honor the men and women who serve our nation as federal, state, county and local government employees and ensure that our government is the best in the world.

VE Day, May 8: In 1945, this is the day when Germans throughout Europe unconditionally surrendered to the Allies. This day marked the end of World War II in Europe.

Military Spouse Appreciation Day, May 10: Traditionally set for the Friday before Mother’s Day, it’s a day to honor military spouses with appropriate ceremonies and activities, and to recognize the important role military families play in keeping our armed forces strong and our country safe.

Armed Forces Day, May 18: Celebrated annually on the third Saturday in May, this day honors everyone serving in the U.S. Military branches; Air Force, Army, Coast Guard, Marines, Navy. There is also Armed Forces Week which typically leads up to Armed Forces Day, although it is not an official observance, many activities are planned nonetheless during the week.

Memorial Day, May 27:  A remembrance observed annually on the last Monday in May to commemorate the men and women who died while in military service. The garrison extends a cordial invitation to members of the Stuttgart military community to attend a Memorial Day observance on Washington Square, Patch Barracks, at 11 a.m., Monday, May 27. The guest speaker will be Fleet Master Chief Crispian D. Addington, senior enlisted leader, U.S. European Command.

Members of the Stuttgart military community may visit the garrison’s Army Community Service for ways to help.

(Editor’s note: Some of the 2019 NMAM information was provided by Military Benefits.info.)