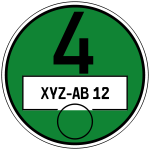 By Megan Brown
Special to The Citizen

From the unknown signs to the all too familiar staus, driving in Germany can leave many people feeling overwhelmed to say the least. However, Germany is taking strides to improve driving conditions in a more environmentally friendly way to protect the health of its citizens.

Many cities in Germany have started issuing environmental stickers (Umweltplakette) to authorize driving within certain areas marked as “green zones”, as a result of an anti-air-pollution law passed in 2006. The law was passed after the country failed to meet European Union pollution standards.

Along with Stuttgart, many other German cities have joined in the pollution fight, including Frankfurt, Heidelberg, and Ludwigsburg. Many other countries in the EU have also initiated the program or programs similar.

There are three issued sticker colors that determine how environmental friendly your car is. Green signifies the highest rank of standard environment safety, going down to yellow, which symbolizes a less green vehicle, and finally red, the lowest standard. Eventually, red and yellow sticker will go away and only green issued vehicle stickers will be the acceptable form for entering “green zones.”

The sticker must be placed on your car’s windshield, or owners could be fined 40 Euros.

You can purchase an Umweltplakette environmental stickers from a TÜV station or online at www.tuev-sued.de or www.tuev-nord.de. The cost is for 6 Euros for a Germany registered car, and 12.50 for a foreign car. Both prices include VAT.