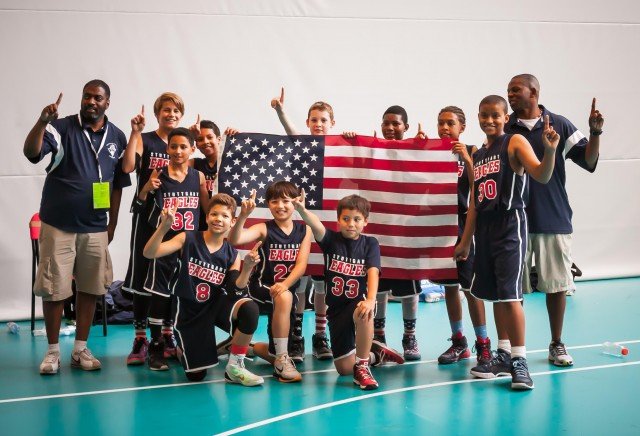 By Jessica Ahles
Special to the Citizen

After a weekend packed with tough competition, buzzer beaters, and standing-room-only crowds, the Stuttgart Eagles U-12 boys basketball team considers taking home the first-place gold medal at the 2015 United World Games their crowning moment of the season.

“I was nervous because we would be playing some hard teams and really competitive teams,” said Ashton Muse, 11, shooting guard for the Eagles. “I was happy and excited coming back to Germany being the team to win the United World Games.

Eleven Stuttgart Eagles U-12 players, ranging from ages 10 to 12, traveled to compete in this year’s United World Games hosted in Klagenfurt, Austria. The UWG connects over a thousand young athletes, from more than 30 countries, bringing them together through a shared passion for sports. From June 18 to 21, teams played in an Olympic-style tournament including competitions in basketball, soccer, volleyball, handball, and rugby.

The Stuttgart Eagles played among 10 international teams from Austria, Germany, Croatia, Turkey, and Hungary, all shooting for a chance to stand on the winners podium in the Wörthersee stadium—known as a platform for the European Soccer Championships in 2008.

“In this tournament, every game was a close game, but the kids always pushed through,” said Head Coach Avery Muse Sr. “It’s one thing to win by a blowout but it’s another to push through adversity and come out on top.”

The Eagles advanced from the group round with a record of 3-0 and defeated Hungary 36-26 in the quarterfinals. However, the most anticipated game of the tournament was not for first place, but instead against another US team from Rammstein in the semi-finals.

“My favorite part was probably the semi-final championship games,” said Donovan Clay, 12, point guard for the Eagles. “Those were the most fun to play in…because it was close until the very end. It felt like the finals.”

The Eagles proved to be the better team, topping Rammstein 42-37, and earned first

place after defeating a German team 40-36.

For Assistant Coach Donnell Clay, the most memorable moment played out immediately following the final buzzer.

“The excitement and joy of the players when they won and seeing their winning smiles, that was the most fulfilling part,” he said.

Avery Muse Sr. said after training hard throughout the season and preparing for the tournament, he enjoyed seeing the kids reap the reward, ending their season with a 26-2 record.

“From the very beginning, we worked extremely hard to play the game the right way, to learn new habits…and to grow together as a team,” he said. “One of the strengths we gained was being able to match the intensity in all of our games throughout the season. This is a really special group of kids.”

The Stuttgart Eagles Basketball Club, according to their website, strives to provide young athletes with the same quality of training as they would receive in the US. In addition to skilled basketball players, they’re mission is to build well-rounded individuals by requiring a high grade-point average and maintaining good disciplinary status.

Reflecting on the tournament, Avery Muse Sr. said it was a great opportunity for the players to gain experience playing competitive teams as well as to build international connections. He said he’s excited to return to the UWG with the team next year to represent both the club and the US.

“I think we showed character, sportsmanship, and skill [in the UWG tournament],” he said. “You always have to remember you’re representing your country and that’s a big deal. We’re there to really represent the red, white, and blue.”