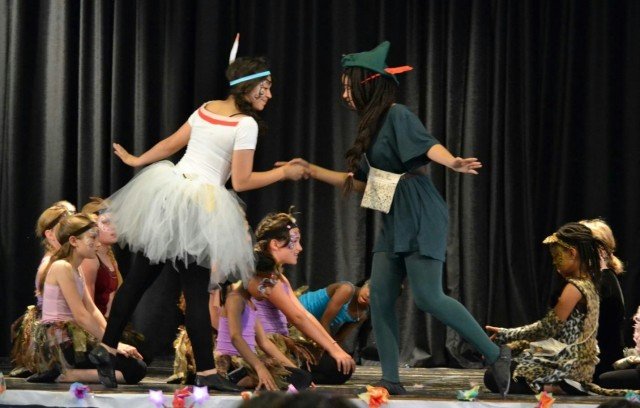 Stuttgart’s Family Morale, Welfare and Recreation Dance Production Studio was established in 2013 and ever since, I have participated in their annual productions, such as “The Wicked Wizard of Oz,” “Peter Pan and the Pirates” and, currently, “Alice in Wonderland.”

DPS is open to children between two and seventeen years of age. As one of the older students in the program, naturally spend a lot of time with the younger children. Working alongside other age groups gives me an opportunity to express my individuality and skill without pressure from my peers. I do not constantly have to worry about being perfect.

Even though, it is sometimes hard to grab the attention of the little ones, having imaginative young minds contribute to the production is a great addition to the stage.

Last year in Peter Pan and the Pirates, the “stars” were played by the two-to-five-year-old age group. Transitions were slightly hectic, but the younger children were very patient and cooperative while being lead on and off stage. And they also looked adorable in their silver skirts and twinkly headbands.

The “Neverlanders”, age six to eight portrayed the “Lost Boys” by dressing as different animals and performing choreography to the songs “Following the Leader”, and “I Won’t Grow Up.”

Next, the “Fairies, oh, the fairies!” Wearing hand­made skirts and sparkling wings of all different colors. The costumes, as well as the nine-to eleven-year-olds wearing them, did a brilliant job of painting the audience a picture of the most beautiful fairies in “Neverland.”

I was part of the older age group, ages twelve-to-seventeen, playing pirates and mermaids. Not only did we play

the rum guzzling pirates, but the charming mermaids as well. We wore sea green skirts and floral headbands, to illustrate an image of elegance and grace that is indicative of a mermaid. At first, it was difficult picking a song, but we decided for “Mermaid” by Train to end the show.

I fell in love with the song and seized the chance DPS provides to older students to create a dance. I was able to develop choreography for a performance with the support of a fellow dancer featuring hula dancing. Many of the dancers, including myself, had never experienced hula dancing before, so it was exciting to learn and incorporate a new style into our performance. This was one of the many times during the development of last year’s production that all of the dancers were introduced to new skill sets.

Over the course of the last two years, I was able to learn from others, share my experiences, network, and express myself as an individual. Dance Production Studio is not only a place to listen and learn, but a place to teach and contribute your own ideas. I am truly going to miss being a part of DPS once I graduate at the end of this year. However, my experiences in the program are part of a memorable adventure that I will include in my resume and carry with me through the rest of my life.