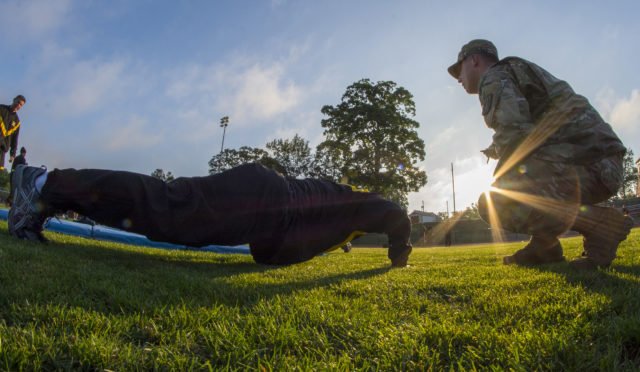 The Army has more obese Soldiers than ever before, and to address the problem, senior Army leaders discussed a holistic approach that includes vegan options at dining facilities and box breakfasts at fitness centers.

Currently, one in 20 Soldiers fails the Army Physical Fitness Test annually and 13 percent of Soldiers are clinically obese, according to statistics from the Army Surgeon General’s Office that were presented at the 2017 Medical Symposium. The conference was hosted by the Association of the U.S. Army in San Antonio, Texas.

“I do think that we’ve been recognizing that what we are doing has not been working,” said Michael McGurk, director of the Research and Analysis Directorate at the Army Center for Initial Military Training. “Holistic health and fitness is a radical change — radical departure. It is going to cost the Army money, time and people. And we’ve got to be willing to give that up to make the changes that we need.”

Healthier food options will be introduced at five Army installations as part of an effort to improve the overall health of Soldiers. The Army’s new holistic approach to health and fitness was discussed at the 2017 Army Medical Symposium. Photo Credit: U.S. Army photo C. Todd Lopez

Tim Higdon, Healthy Army Communities program manager, said one suggestion is to have fitness centers provide box breakfasts so that Soldiers in a time crunch will not need to choose between having breakfast and working out. Higdon said HAC is also planning to attempt innovations such as requiring 15 to 50 percent of vending machines to have healthier options, while others will be 100-percent comprised of healthy items. Vegetarian and vegan options may also be added to dining hall menus.

“It’s about action and what we could do next to improve the overall health of our communities,” Higdon said.

McGurk noted that the Army has not changed its physical fitness test since 1980. He said the field manual for Army Physical Readiness Training, FM 7-22, is now being rewritten with a new name, Holistic Health and Fitness.

“Wearing the uniform that says ‘U.S. Army’ is a privilege and an honor and there [are] responsibilities,” McGurk said. “And one of them is a baseline level of fitness and capability which I think we need to maintain.”

Command Sgt. Maj. Michael Gragg of TRADOC said five installations and eight fitness centers will transition to meet the new initiatives. At those locations, sports performance, nutrition and PT training classes will take the place of recreational activities, and will take place during non-peak fitness hours. Units can use the facilities for training and Soldiers who need additional PT time can also take courses.

Col. Matthew Garber, director of the Rehab and Reintegration Division at the Office of the Surgeon General, said that new emphasis will also be placed upon decreasing the impact of muscular skeletal injuries on readiness. Looking at the entry standards and alternative training methods could help decrease preventable injuries during physical training. He also said it is important that Soldiers suffering from muscular and skeletal injuries have access to treatment.

“When you do get hurt, we know it’s vital that you get seen early to prevent a chronic problem from developing,” Garber said.

Retired Brig. Gen. Peter Palmer said to achieve a truly holistic approach to health and fitness, the cognitive aspect of training must be studied.

“The key challenge here is if we’re going to really talk human performance, we’ve got to understand how we actually perform, Palmer said. “And that’s why I emphasize the brain portion.”

In another panel discussion, Maj. Gen. Brian Lein, commanding general of the Army Medical Department Center, discussed the possibility of artificial intelligence aiding the work of Army medics in the battlefield. Lein said that the Army is already experimenting with virtual reality in training situations at Fort Leavenworth, Kansas. There, simulations with frames of cockpits and armored vehicles simulate emergency medical situations. Lein said the Chinese already have an A.I. system for medical providers.

“That’s never going to replace the anxiety and the stress of a real patient bleeding to death in front of you,” Lein said. “But the closer that you can get to virtual reality, the better off we’re going to be.”

Surgeon General of the Army Lt. Gen. Nadja West noted that each facet of the combat medic process — from training to veterinary assistance for military working dogs — plays interdependent roles. She said each role has an integral part in assuring the Army’s warfighters are fit for battle.

“What keeps a Soldier of a free country reliable in battle?” West said. “I would say this, in addition to great leadership, great training … (It is) the fact they know if they’re harmed or injured, someone will be there to render aid in any way that they can.”

Healthy Resources for all cardholders in USAG Stuttgart

Dietitian/Nutritionist – Along with regular clients and training sessions, Stuttgart’s resident nutritionist works with health educators at the Stuttgart Health Clinic’s Wellness Center to develop personalized food and fitness plans for individual lifestyles and goals. Schedule a meeting through the appointment line at DSN: 590-2900/civ. 06371-9464-2900; or directly at DSN: 590-1744/civ. 06371-9464-1744.