“You Made the Grade” Program rewards military students 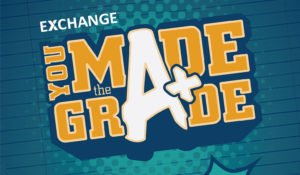 For military students, making multiple moves with their active-duty parents is just a part of life. In fact, military children typically move six to nine times by the time they’ve completed 12th grade, according to the Military Child Education Coalition.

The Army & Air Force Exchange Service appreciates the sacrifices military students make and is rewarding young scholars who excel in the classroom with its “You Made the Grade” program, now in its 20th year.

“The Panzer Main Exchange celebrates these scholars, their resiliency and hard work in the classroom.”

Students in grades 1st through 12th, including home-schooled students, with a B average or better, are eligible to receive a $5 Exchange gift card each grading period during the 2020-21 school year.

“Our nation’s youngest military family members remain committed to their education, despite frequent moves, changing schools or having parents deployed,” said General Manager, Sandra Reed. “The Panzer Main Exchange celebrates these scholars, their resiliency and hard work in the classroom.”

Students must present a valid military ID in stores and proof of a B average or higher during any grading period at the Panzer Main Exchange customer service area. Students can qualify for a worldwide sweepstakes to win a $2,000, $1,500 or $500 Exchange gift card. Drawings are held in December and June.