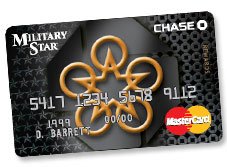 Launching in October, all MILITARY STAR® cardholders will earn 2 points for every $1 spent in Army, Air Force, Marine Corps and Navy exchange stores, and wherever else the MILITARY STAR® card is accepted. For every 2,000 points earned, shoppers will automatically receive a $20 Exchange rewards card.

The updated MILITARY STAR® card, which will arrive in cardholders’ mailboxes in mid-September, will have enhanced features to protect service members and their families from becoming victims of fraud. A security code on the back will provide extra protection when shopping online. The card will also include expiration and “member since” dates on the front.

The new MILITARY STAR® card reflects a patriotic look that includes an image of the Statue of Liberty and branch of service seal, something customers voiced as important in focus groups.

Though its look is changing, the MILITARY STAR® card’s benefits will continue, including:

In addition to advantages for customers, the entire military community benefits when shoppers use a MILITARY STAR® card.