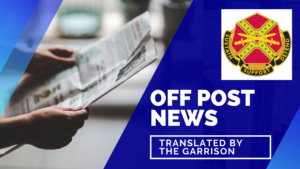 Translation courtesy of the USAG Stuttgart Public Affairs Team
May 4, 2020

Strict corona restrictions were violated more than 21,500 times in Baden-Württemberg. The Polizei checked more than 222,000 people and inspected 37,500 cars from March 23 to April 29. By the end of April, 20,802 administrative offenses and 715 criminal offenses had been registered, the Ministry of the Interior announced. Among the administrative offenses were violations of the ban on visiting nursing homes, running a pub, or dental surgery. Meeting in an apartment or a walk with several friends was also punished. Offenses in connection with the pandemic include violations of the quarantine regulation or the organization of larger events. In the fight against the spread of the coronavirus, there is the threat of severe penalties for violations of the so-called legal ordinance on infection-protection measures. For example, anyone who is in the streets and squares with more than two people who are not part of the family will be fined between 100 to 1000 euros. If a bar or club closed because of Corona continues to operate, fines of between 2500 to 5000 euros are threatened. And those who visit a hospital or nursing home despite being banned risk a fine of between 250 to 1500 euros. Repeated violations can cost up to 25 000 euros. (Stuttgarter Nachrichten, May 1)

Restaurants will be the main topic May 6

According to Federal Minister of the Interior Horst Seehofer (CSU), the federal and state governments will discuss the further course of action in the corona crisis on Wednesday. “I would like for us to achieve more loosening of restrictions step by step in the light of the development of infections”, Seehofer said on the ZDF channel “Berlin direkt”. For restaurants and pubs, he suggested the introduction of distance regulations. He added that the discussions would also cover schools, the Bundesliga and popular sports. (ZDF, May 3)

In the City of Stuttgart, several thousand people demonstrated against the measures in the fight against the coronavirus. During the demonstration at the Cannstatter Wasen, initiator Michael Ballweg demanded the fulfillment of basic rights such as freedom of assembly and freedom of beliefs. The IT entrepreneur spoke of around 5000 participants on Saturday. The Stuttgart police didn’t want to give an estimate of the number of participants. The initiative behind the protest is called “lateral thinking.” After an initial ban on the city, the initiative was allowed to demonstrate because the Federal Constitutional Court had granted an emergency appeal against the ban. Ballweg‘s regular demonstrations are getting more crowds: last week there were only a few hundred at the Schlossplatz. Similar demostrations are taking place nationwide. Some critics fear that conspiracy theorists and right-wing populists will take over the initiative. The “freedom virus” had spread in Stuttgart, Ballweg said on Saturday. A red banner carried the slogan “We are the Nation,” which is also chanted by supporters of the right-wing Pegida movement. One sign read: “Against forced vaccination and surveillance app”; another one said “Democracy instead of Merkelatur”. The German flag was also seen in the crowd. Some gatekeepers, many of whom were recruited spontaneously during the event, demanded that the masks be taken off, even though they were approved. Overall, remarkably few participants wore a protective mask. The police spoke of a peaceful course. The demonstrators had kept their distances for the most part. (Stuttgarter Nachrichten, May 3)

Many more infected people than assumed

Ten times more people in Germany have become infected with the coronavirus than previously reported. According to a study by researchers at the University of Bonn led by virologist Hendrik Streeck, at least 1.8 million people are said to have already become infected with the virus. The calculation is based on data from the Robert Koch Institute from Sunday, with around 162,600 officially reported infections and almost 6700 deaths. The RKI itself assumes that the number of unreported cases is significantly higher. The researchers interviewed a total of 919 people in 405 households in Gangelt in order to be able to draw conclusions about the occurrence of infections in Germany. (News channel NTV, May 4)

Some students return to their classrooms

After seven weeks of school closures, around 330,000 school children will return to their classrooms on Monday. These are initially the students who will graduate this year or next year. Classes are to be held under strict rules of distance and hygiene to prevent infection with the coronavirus. However, masks like those used in buses, trains and shops won’t be required in class. In the next step, the fourth-graders are to return to the schools. The goal of the ministry of education is to ensure that all 1.5 million students in the southwest of Germany receive at least some time of physical tuition this school year. (Welt, May 4)

This weekend, the state government of Baden-Württemberg decided on further changes to the Corona Ordinance. The new rules will apply from Wednesday, May 6. Playgrounds, museums, galleries, memorials, zoos and animal parks can reopen on the basis of the new regulation. “This should bring some relief to families and children,” said Minister President Winfried Kretschmann (Greens) in a statement by the state government late Saturday evening. It is also necessary to deal with these “new loosening measures” in a responsible way, because otherwise we risk increasing numbers of infections again,” Kretschmann emphasized. It had already been decided beforehand that from Monday, May 4, services and prayer events would be made possible again, but only under strict hygiene conditions. Additionally, facilities for out-of-school professional training, such as the chambers of industry and crafts or for occupations in the care sector, are being opened. In the retail sector, shops with a sales area of more than 800 square meters will also be allowed to open again from Monday. Dentists will again be allowed to offer their services without restriction, and hairdressers and pedicure studios will reopen.

Restrictions still in force are: the distance rule and contact restrictions, including the restriction on private travels and family visits; meetings in clubs and other sports and leisure facilities and other public and private educational institutions in the out-of-school sector unless exceptions are permitted (exceptions apply to educational institutions relating to vocational training); and the field of top-level sport. Visiting bans in hospitals and in-patient care facilities remain in place with the previously possible exceptions. (Schwaebische Zeitung, May 4).

In the corona crisis, a large majority of Germans are in favor of internationally coordinated efforts to contain it. According to a survey conducted by the opinion research institute Forsa, 73 percent of the German citizens asked think it makes more sense for states to agree on international solutions that apply to as many countries as possible. Only 25 percent of people would find it more reasonable if, in a similar situation, each country were in future to decide mainly on its own and seek its own solution. In eastern Germany, therefore, 82 percent are in support of international cooperation than in the west (71 percent). During the period from April 9 to 14, Forsa interviewed 1003 people on behalf of the journal “Internationale Politik,” which is published by the German Council on Foreign Relations. (NTV, May 4)

How does Covid-19 affect pregnant women?

In April,. According to medical experts, dramatic episodes like this are extremely rare. However, it is still unclear why in a few cases the condition of pregnant patients can worsen so rapidly.  The coronavirus and its effect on the course of a pregnancy have hardly been researched yet, and the data available on it are scarce. A few weeks ago, a 41-year-old pregnant woman infected with SARS-CoV-2 died after the woman’s condition rapidly deteriorated following an emergency C-section at Weiden Hospital.

The woman was transferred to the University Hospital of Erlangen, where she died as a result of a corona infection. A few days earlier, her baby had been saved by an emergency C-section. “Cases with such dramatic developments are individual cases. Most of the pregnant women who have covid infections do not suffer,” said Matthias Beckmann, director of the Erlangen Women’s Hospital. He is one of the most renowned gynecologists in Germany. It isn’t clear why the majority of Covid-19 infections during pregnancy are mild, but in a few cases the disease can lead to death. “Of course there are factors such as the age of the mother, previous lung diseases, diabetes, etc., which worsen the outcome. At the University Hospital in Erlangen, we have so far had two patients who were infected with Covid-19 and became seriously ill,” said Beckmann. “In both cases we proceeded in a similar way; one woman is now at home and well, the other woman has died. We still do not know exactly what the reason is for the fact that in a few cases the condition of pregnant patients rapidly worsens. The director of the Clinic for Gynecology and Obstetrics of the St. Joseph Hospital in Berlin, Michael Abou-Dakn, emphasized that pregnant women shouldn’t be overly unsettled by the news about the coronavirus and should continue to be happy about their pregnancy.

“The virus is no more aggressive in pregnant women than in those who are not pregnant. In contrast to SARS and MERS infections, they are also not exposed to more frequent ventilation,” said Abou-Dakn. Like Beckmann, he considers the risk of serious complications to be extremely rare. In Erlangen they’re currently working on collecting new data that could shed some light on the situation.

“We are currently testing all women who come to us for the virus and antibodies under study conditions. We expect to have a solid data base of real infection rates in pregnant women within three months,” said Beckmann. (NTV, May 3)

On Friday, May 8th, public buildings throughout Germany will be decorated with flags to mark the 75th anniversary of the end of the Second World War and the liberation from National Socialism. (City of Stuttgart, May 4)

2020-05-04
Previous Post: Some MWR services reopen, CMR hours adjust
Next Post: Patch Library and Arts & Crafts back in the fight against boredom