HomeCulture & LeisureMessengers of Spring: Storks are back in Stuttgart region

Messengers of Spring: Storks are back in Stuttgart region 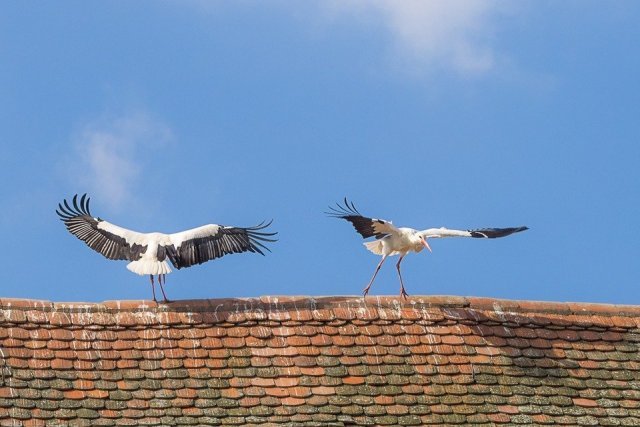 On February 16, the regional Suedwest Presse and a number of newspapers and online magazines reported that several pairs of storks had been sighted near Freiburg in Baden-Wuerttemberg. The headlines announced, “The Precursors of Spring have Returned” – more than a month before the calendar start of the season. In past years, storks usually migrated back from their winter quarters in Spain, the Mediterranean and North Africa around mid-March.

Here in Germany’s great southwest, storks have for centuries been celebrated as good-luck symbols, heraldic coat of arms motifs, all-around fabulous creatures, certainly much more than just quaint and interesting flying beasts. In fact, these large, black-and-white feathered, long red-beaked, red-legged migratory strutting birds are the “stuff of legends,” anecdotes, myths and fables galore – and not only because they supposedly bring babies to new parents! That legend is part of ancient European folklore, popularized by the 19th-century Danish writer, Hans Christian Andersen in a story called The Storks.

Fact is, for centuries, people have felt fortunate to have storks nesting on their roofs. It is said that they protect the house from fire, lightning and other natural and even man-made disasters.   To encourage storks to nest on their houses, in villages and all over the countryside, farmers and homeowners build platforms or place large wagon wheels onto chimneys or barn roofs to “ help” storks to settle there. They also nest on church steeples, towers, telephone-poles, walls, haystacks, and sometimes in trees, on cliff-ledges, occasionally on the ground. Storks tend to return to the same nesting place often with the same partner, year after year! Here in Baden-Württemberg (and all over Germany), big efforts have been made for years to increase the decades-long dwindling stork population (only 15 pair in 1975) by improving the proper local environment, trying to restore wetlands and meadow areas for storks to roost. Last year, 760 pair were counted in the region. Their arrival is a big event in towns lucky enough to have them choose to park there.   If you live off-base, perhaps you might be witness to such a joyful happening! Share the good news.

About the Author: Teri Weiss, contributor to  The Citizen’s Culture and Leisure section, was until 2014, a University of Maryland History, Government and German Studies professor and long-time author of many AFN radio broadcasts such as “Here and There in Baden-Wuerttemberg.”  Weiss also covered articles on German politics, life and culture, customs and traditions, and  translated, edited and published the English annotated version of “The German Southwest” (KohlhammerVerlag, Stuttgart). Tuebingen is currently her home away from her Chicago home, in the heart of Germany’s Great Southwest.