Where you’ll find those traces of royalty around Stuttgart 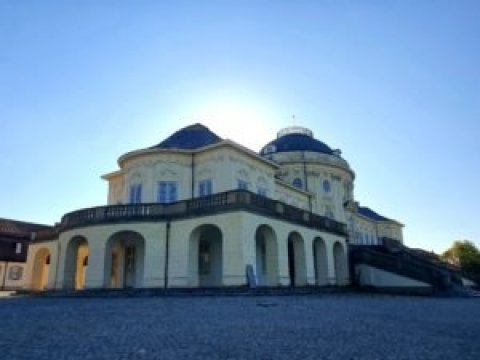 Stuttgart is the modern-day capital of Baden-Württemberg, but it also had a centuries-long role as a home to kings, queens, dukes, and duchesses. Some symbols of this history are subtle, like a crown-topped royal monogram above a door of the opera house. Others, like imposing palaces on a main square, are more obvious.

There are numerous castles, castle ruins, and former royal residences in the greater Stuttgart area, but six of the most central and well-known include the Residenzschloss in Ludwigsburg; and Altes Schloss, Neues Schloss, Schloss Solitude, and Schloss Rosenstein in Stuttgart. They make nice picnic spots and photo backgrounds these days, but how did they come to be, and how were they used before?

Note: Rulers are referred to by their German names. Additionally, the word “Schloss” is translated both as ‘castle’ and ‘palace’, but the English word is chosen based on the type of building (i.e., fortified or not).

Duke Eberhard Ludwig was inspired to transform a small hunting estate in the woods outside Stuttgart into a sprawling Baroque palace — one of Europe’s largest — after visits to Versailles and other European courts. Built from 1704-1733, the sheer scale of the building project prompted the development of an adjacent new town, fittingly called Ludwigsburg.

Eberhard Ludwig’s immediate successor cared little for the palace and moved his residence back to Stuttgart. The next duke, Karl Eugen, used Ludwigsburg as his unofficial, primary residence until 1775, during construction of the Neues Schloss in Stuttgart. King Wilhelm I moved into the Neues Schloss upon taking the crown in 1816, but signed the kingdom’s constitution at Ludwigsburg three years later.

The 79-acre complex consists of extensive gardens and 452 rooms in 18 buildings. Daily guided tours showcase the interior of the main building, and there are small museums of ceramics and fashion. Together with the “Blooming Baroque” gardens and various events held onsite, it plays host to nearly half a million visitors a year. Schloss Favorite, across the road from the main palace, and the lakeside Schloss Monrepos complete the Ludwigsburg trio.

The Altes Schloss (“Old Castle”) is one of the oldest buildings in Stuttgart. Its history dates back to 950 A.D., when a duke of Swabia (which preceded Württemberg) established a moated fortress on the site. The intent was to protect a strategically important horse breeding ground, the “Stutengarten.” The city’s name and symbol originate here.

The stronghold became the primary residence of the dukes of Württemberg in 1311, and would remain so for about the next four centuries — expanding, improving, and strengthening to meet their needs. Its current four-winged castle form took shape in the mid-16th century, including the large round towers and courtyard.

It fell into disfavor after the construction of Ludwigsburg Palace, and Duke Karl Eugen only considered moving the ducal seat back to Stuttgart on the condition that it be replaced (hence the construction of the Neues Schloss). King Karl began restorations over a century later, and it started functioning as an exhibition space in 1899, with the opening of the Württemberg Army Museum and royal portrait gallery.

The castle was damaged by fires and air raids in the 1930s-40s, and while some areas were rebuilt in their original style (namely, the courtyard and oldest wing), reconstruction in the following decades was intended to provide a home for the Württemberg State Museum, which continues to be based there.

Construction on the Neues Schloss (“New Palace”) began in 1747 as an attempt by Stuttgart to regain the status of Württemberg’s capital, which had been moved to Ludwigsburg by Duke Eberhard Ludwig. Duke Karl Eugen, unsatisfied with the aging and by then inadequate Altes Schloss, had insisted on a replacement.

Ironically, Karl Eugen never had an opportunity to live in the palace, which suffered construction delays due to changes of architect, a fire, and his own disinterest. It was only fully completed in 1807, coinciding with a visit by Napoleon Bonaparte.

The palace was mostly destroyed by Allied bombing during WWII and was nearly torn down completely in favor of a hotel being built on the site. A margin of only one vote in the state parliament secured the castle’s reconstruction in 1957. Since then, it has been used by the state government, and today houses the ministries of education and finance.

Located directly behind the palace is the Akademiegarten, so named for the former military academy turned university which used to occupy the space from 1775 to 1959. The visibility of the palace’s rear façade would have been largely blocked by academy buildings, contributing to its comparatively, unadorned look on this side. The former school’s ruins were eventually cleared (amid protests) in order to expand Konrad-Adenauer-Strasse (B14). The lion fountain, which remains, formed a central courtyard for the academy buildings and was designed for King Friedrich I, Württemberg’s first king and the father of Wilhelm I.

This secluded Rococo palace and hunting retreat was commissioned in 1763 by Karl Eugen, who took an active role in its planning, and completed in 1769. The main building was ceremonial in nature; the duke and his staff would live in the neighboring cottages when spending time there.

It was used as a military hospital during World War I, but soon fell into disrepair until the state government restored its interiors between 1972 and 1983.

Approaching streets are lined with trees, and a monumental vista offers a straight-line view down the hill toward Ludwigsburg. Its grounds were the original home of the academy, which would later come to be based behind the Neues Schloss in Stuttgart. It has hosted a renowned interdisciplinary artist-in-residence program since 1990.

Built as a summer home for Wilhelm I in 1830, the three-wing, neo-classical Schloss Rosenstein sits perched atop a hill with an excellent view of the Neckar River and Bad Cannstatt.

The palace shares its name with the expansive park surrounding it; the name “Rosenstein” came courtesy of a decree by Wilhelm, who wanted the site named after the favorite flower of his deceased wife, Queen Katharina. The palace had a clear line of sight toward the mausoleum he had built as her resting place, on a hilltop in Untertürkheim, and a rose garden adjoins its eastern façade (the wing which housed the king and queen’s private rooms). Wilhelm died here in 1848, after which his remains were moved to the mausoleum.

During its time as a royal residence, it had 81 rooms. It now forms part of the State Museum of Natural History and is located close to the Wilhelma Zoo, a former royal bathhouse and gardens also constructed for Wilhelm I.

Located just down the street from Kelley Barracks, Schloss Hohenheim is a former summer residence of Karl Eugen’s, which began construction in 1785. It languished unfinished after his death in 1793, but Wilhelm I brought it back to life by making it the home of an agricultural institute in 1818, during a time of crop failures. This institute would eventually become the University of Hohenheim, which occupies most of the building today and maintains the botanical garden and forests which surround it.